A conversation on the way home from school:

Will: Mommy, look at that car! It's like a Corvette. I wish Daddy could have a Corvette.
Me: Did Daddy ask you to say that?
Will: (Hangs head) Yes.
Posted by The Carter's at 5:32 PM 3 comments:

A lot's been going on.

In May I had a baby: Max Schuyler Carter was born May 24th at 7:25am; weighed 7lbs 9oz and was 20.25 inches long. Quite the difference from his brother (8lbs 8oz and 21"), not that I'm comparing. Max is an original name for us, but my love of family names is represented in Schuyler (or Skylar, phonetically)--it was my great-grandfather's name, uncle's middle name and brother's middle name. Spelled it the original way, thank you very much.

Max is a dream. He looked exactly like Will when he was born but is starting to develop his own little (darling) face. He has jowls, which I love.

The other thing about Max is he squeaks, which is kind of adorable once you get used to it. When I took him up to work one day during maternity leave, a colleague said he thought I was carrying a piece of squeaky luggage. It turns out Max has stridor and now we have to figure out what's causing it. As it's been explained to me, the best case scenario is the cartilage surrounding his larynx/trachea didn't harden like it should, so when he takes a breath it causes the cartilage to vibrate and produces a squeaking sound. When he gets excited (from hunger or the ceiling fan) it gets much louder and faster; when he's calm or in a deep sleep it's softer or non-existent. Because of the latter, I honestly believed it was getting better; the doctor, however, said because it's still going on and it can get loud means it's progressing and he wants me to take him in to see a specialist for testing.

So, Wednesday morning I have to take a hungry 10-week-old to have chest x-rays and to do a swallow study where Max will drink a radioactive dye and possibly also have a tube shoved down his throat.

I can honestly say I'm not worried about the results; I really think they're going to tell me he'll grow out of it. I mean, he's gaining weight like he should and growing like a weed which, if there was something obstructing his airways and preventing him from eating, wouldn't be the case. I'm worried about seeing my little baby lying on a table somewhere. Or worse, not being able to see him lying on a table somewhere. I keep telling myself there are thousands of parents across the country that would give their eye to "only" have my child's condition/situation; there are too many people who've lost their babies to cancer or heart failure. This? Stridor? I'm convinced is nothing. It's the diagnostic process I'm dreading.

So anyway, really looking forward to Wednesday.
Posted by The Carter's at 9:52 PM 3 comments: 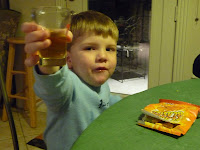 Jason's been out of town a lot lately. A lot. He left last Thursday, came home Sunday night, left Monday afternoon and is expected back next Sunday. Rough when you've got a 3 year old. Even rougher when you've got a 3 year old and are trying to grow a second child. We're doing just fine, though. Jason had told Will to be a good boy while he was gone and Will's taking it to heart. Bedtimes are going much smoother, he's following directions better, just being all around awesome.

Will spent the night w/ Grandma last Friday and got to stay and play for a majority of Saturday as well. Since he got to spend so much one-on-one time with Grandma, now he's kind of used to her being around and wanted to call her tonight to say good night. So I turned the phone on speaker so Will's voice would be the first she heard. It rang forever before I realized that tonight was her tennis night, I heard her pick up in a panic:

Grandma (shouting off the phone): It's my pregnant daughter-in-law! She's home alone and never calls. I hope she's okay.

Will: Grandma! You have to come to my house. I love you, Grandma

Me (shouting): Janice, we're fine! I forgot tonight was tennis! Everything's fine!
and then she hung up. I still don't know if she heard me--hope so.

Will was disappointed he didn't get to say good night, so I decided we could call Daddy. Of course he didn't pick up either, so Will had to leave a message on the voicemail which I knew would break Jason's heart, but it bothered Will that the people he most wanted to talk to weren't available.

Lemme explain....No, is too much. Lemme sum up:
Our fancy-schmancy computer essentially blew up. I've had limited computer access and no pictures.

Jason bought a fancy new camera and has set up a Flickr account for us here. He's already posted some stuff and it's very cute. Since Jason's doing it, it'll probably be posted to often until he gets a new project.

I'll be better about updating from now on. Promise.
Posted by The Carter's at 10:49 PM 3 comments:

Yesterday was Will's Thanksgiving Lunch at daycare and parents/grandparents were invited to attend. I was scheduled to meet Grandma at the school shortly before noon so we could watch the kids do some last minute dancy-dancing before lunch.

When I got to the classroom, I was accosted by many tiny people wearing the most adorable Indian hats--complete with feathers--and a beautiful spread of Thanksgiving lunch, complete with all the necessary sides. But Tiny was nowhere to be found. The bathroom door was only open a crack, but I could see his little striped arms going nuts, so I figured he was almost done and I could surprise him when he came out. So I waited.

People were starting to sit down to eat, so I finally went to check on him. As I approached the door I could hear sobbing. Opening the door, I immediately saw a pair of poop-streaked and completely saturated underpants. Then I saw a sock and a shoe. Sitting precariously on the toilet seat was the sock mate, preparing to say good-bye cruel world and end it all.

Then I turn to see my sweet little Will, going commando with his pants on backwards and soaking wet but his little Indian headress and feathers completely unscathed, sobbing because he had an accident. Which he blamed on his shoes. I got him calmed down and cleaned up, all while reassuring him I wasn't mad, and he proudly told me his socks didn't get wet.

Thank God for that.

We wound up having a wonderful time: the food was really good, the kids were really funny and Will felt pretty special having both Grandma AND Mom show up. 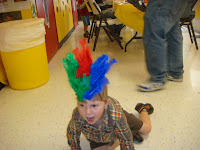 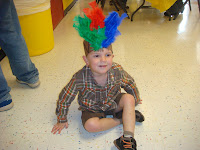 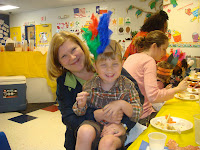 That's Jenny behind Janice--I have the most awesome picture of Jovie being thuggish but don't want to post it unless I get permission.
Posted by The Carter's at 11:36 AM 4 comments: 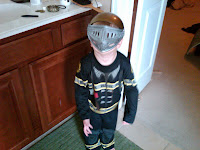 Knights were sort of the original firemen, what with battling fire-breathing dragons, right?
Posted by The Carter's at 8:36 AM 5 comments:

The Carter's
Sad little attempt at keeping in touch with family and friends that live very far away.